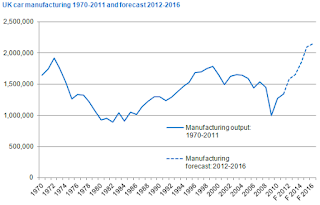 British Lean Manufacturing was at the top of its game in 1935 with the Morris Motor Company and Frank G. Woollard having implemented Just-in-Time, Workers-as-problem-solvers,  Flow-Production and Rapid-Change-Over methods**.  Cycle-Times and Cost-per-unit were being halved and halved again**.  Defects were being caught and fixed upstream at the root cause**.  Customers around the world wanted British products and were happy with them.  Life was good for Lean British productivity and manufacturing in 1935.  What the #%@ happened then ?? Why do the Japanese get all the credit for Lean ?  Well, a event started in 1939 called World War 2,  and post-war change in British culture and governments has a lot to do with it. It has taken Britain and British culture over 60 years to recover back to its Lean roots of 1935!   Here is how…
In 1939, companies such as Morris Motors changed over to mass production of military vehicles, planes etc with no true market forces at play, no commercial customers or true cost considerations. Getting out as many Spitfire Planes and Enfield Rifles at any cost was the name of the game. After WW2 Britain had at least a decade of re-building and re-focusing ( helping Japan rebuild for example )  in which production was understandably below optimal.  Then in the 1960’s and 70’s Britain’s Labour Party, socialists tendencies and workers Unions gained a strong control on the British management and working culture, and the Labour government under Harold Wilson ( Prime Minister 1964 -70 and 1974-76) were more focused in support of workers pay and working conditions, than they were about productivity, quality of products and making sure the customers of British products and services were happy.   Productivity declined in the 1960’s and 70’s this is indicated in this graph    http://www.smmt.co.uk/wp-content/uploads/sites/2/Productivity-of-UK-motor-industry.jpg   Quality also declined and the customers of British products around the world ( including Brits)  stopped buying them.  Lean methods did not stand a chance because the focus was too much on workers rights and conditions and not enough on the products, process and the customer.  It was a vicious circle of course because lost production and customers meant factory closures, more unemployment and falling wages.    In the meantime Japan did not have the burden of a socialist culture which put workers rights ahead of the product, the process and the customer.  So Japan caught up very quickly in Lean thinking and methods, and applied it in an effective way that the British culture would not allow.  ( A little help from the best brains from the USA, Deming, Juran et al didn’t hurt also ! )  This is how Britain lost its advantage in discovering lean methods and why we now teach ‘Lean’ as a starting in Japan.  ( **Reference to Morris Motors and Lean Methods made from Frank G. Woollard’s 1955 book ‘Principles of Mass and Flow Production’  and the Reprint Edition including ‘Notes on British Methods of Continuous Production’ 1925, with Commentary and Analysis by Bob Emiliani, PhD